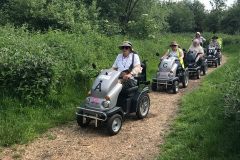 7TH JUNE 2021: LEE VALLEY REGIONAL PARK This was a gentle and easy ramble, mostly on surfaced and level paths, on a very warm and rather humid summer’s day. Starting from the Lee Valley Animal Adventure Park, our fairly small group of 6 scooter riders and 3 walkers (including new members Graham and Suzanne) meandered through the 1,000 acre wetland park on the northern edge of London. The Lee was London’s working river and was known as London’s ‘privy, workshop and backyard’. The valley was home to railway sidings, rubbish dumps, gravel pits, sewage works and factories producing explosives, furniture, chemicals, railway engines, electronics – among other things. In his Greater London Plan of 1944, Sir Patrick Abercrombie suggested that ‘the Lee Valley gives the opportunity for a great piece of regenerative planning – every piece of land welded into a great regional reservation.’ This idea lay dormant until the early 1960s and finally the Lee Valley Regional Park Bill received royal assent in December 1966. The Lee Valley Regional Park Authority was constituted on 1 Jan 1967. Since then, rubbish dumps, gravel pits, scrap yards and industrial sites have been transformed into award winning open spaces and world class sports venues, including the 2012 Olympics White Water Centre. The park covers 10,000 acres and stretches 26 miles from north to south. Our route took us past lakes, alongside parts of the River Lee, through grassland and meadows; the Park is a haven for all manner of wildlife, including otters and especially birds. At various points on our ramble we came upon interesting and unusual sculptures – the Boulders sculpture was of particular interest to some of our group, who found it to be reminiscent of something unmentionable here!! Unfortunately we were not able to see the Lee Valley White Water Centre (home of the white water events in the 2012 Olympics), which was closed at the time of our ramble due to Covid restrictions. Mark and Bee 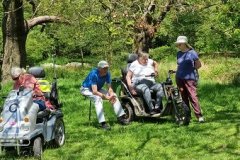 8TH JUNE 2021: EPPING FOREST Epping Forest stretches over 12 miles from east London into Essex and covers over 2,500 hectares (nearly 6,200 acres). A former Royal Forest, it was used by Kings and Queens of England as a hunting ground. Our party of 8 scooter riders and 11 walkers (including new members Wendy and John) for this ramble was supplemented by 6 new volunteer/potential towers, who had come to be trained by Judy and Bernard Cunningham on the intricacies of the MSU, FSU and the toilet tent! It was another glorious summer day and thankfully much of this ramble was along forest paths providing lovely dappled shade. From the Bury Road car park we crossed the somewhat bumpy and very open Chingford Plain before moving into the welcome shade of the forest proper. Our route took us on mostly compacted tracks and grass land. We had to cross the busy Epping New Road, but with the help of our army of helpers, suitably decked out in DR Hi-Viz jackets, the crossing was negotiated without incident. The final section of the morning’s route took us along the appropriately named (and fairly steep) Ups and Downs, before we stopped for lunch in some welcome shade at Rushey Plain, close to the Epping Forest Visitor Centre at High Beech. After lunch we embarked on the long incline (luckily mostly downwards), crossing the main road safely once more, towards the beautiful Connaught Water, with its abundance of water birds. From here we crossed open grassland up to Queen Elizabeth’s Hunting Lodge, dating from 1543 and the Chingford Visitor Centre. From here it was a short trek down to Chingford Plain to return to our starting point. Mark and Bee 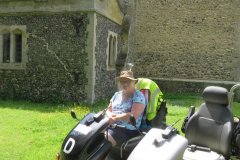 10TH JUNE 2021: HUNSDON AIRFIELD LOOP Another fine day for rambling, thankfully slightly cooler than the previous days. Today’s party was made up of 7 scooter riders and 6 walkers. From the Playing Field in the centre of Hunsdon village we followed the farm track leading to Fillets Farm. Continuing on this track we descended across arable land, giving us a delightful long view towards Widford Church, where we stopped for our coffee break, overlooking the River Ash valley. Widford Church boasts a Hertfordshire spike, which is a short spire, with its base concealed by a low parapet, rising from a square tower. From here we took a section of road until we reached Levenage Lane, a bridleway that took us on a winding track through woodland. We then followed field edges and farm tracks to the open landscape of the site of the former WW2 Hunsdon Airfield, now largely used as arable farmland, but also home to the Hunsdon Microlight Club. RAF Hunsdon became operational in 1941. It was particularly noted for its squadrons of de Havilland Mosquito fighter-bombers, and for being the base from which Operation Jericho (the Amiens Prison Raid) was launched in February 1944. Continuing along the side of Black Hut Wood we came to the microlight flying club, where we stopped for lunch. From here we paused at the memorial to the 126 air and ground crew who died while flying from or serving at the base – many from Australia, New Zealand and Canada. Taking the airfield roadway led us to Cockrobin Lane, a charming ancient green lane and bridleway, providing shade and shelter. From the bottom of Cockrobin Lane we moved along a farm track past Eastwick Hall Farm and into a planted wooded area, passing close to Hunsdon House (a former estate and hunting lodge of King Henry VIII, here Princess Mary spent much of her early life). We crossed a section of a filed planted with rape – although the path had been kept well cleared by the farmer, the weight of the ripening rapeseed meant that the plants were falling across the pathway – it was like going through a tropical forest! We came out at the Nine Ashes Fishing Pond and after a short section of road, we move onto the airfield again and returned by way of Drury Lane. The day ended with tea and cakes at Mark and Bee’s house in Drury Lane. 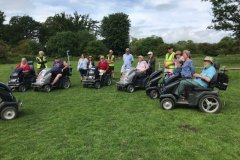 11TH JUNE 2021: HATFIELD FOREST & FLITCH WAY Hatfield Forest is the best surviving example in Britain of an almost complete Royal Hunting Forest, declared as such by Henry I in 1100. It was acquired by the National Trust in 1923. It is a managed landscape, created by centuries of human intervention and continues to be managed with traditional woodland techniques of coppicing, pollarding and grazing. The wood pasture is a rare habitat in the UK. Today we welcomed 8 scooter riders and 9 walkers, including new members Dave and Helen with Lara, and Richard Walsh with his son James. Cooper and Islay , very well behaved dogs, joined us too. Our ramble was prefaced by a short talk from Ian, one of the National Trust Rangers who has worked at Hatfield Forest for 27 years. His very informative talk filled us in on the history and forestry management practices used at Hatfield Forest. Our route took us in a figure of eight from the Café and Visitor Centre by the lake on a mix of boardwalks, surfaced pathways, broad grassy rides and narrower woodland paths. We started by crossing the dam at the end of the lake and follow a long section of boardwalk before coming to a wide, open grass area alongside Elgin Coppice. Crossing this, we left the Forest and continued for about a mile along the firm-surfaced Flitch Way, a linear country park which follows the line of the former Bishop’s Stortford to Braintree railway line, before returning to the coppices and rides of the Forest. We passed Hangman’s Coppice and the Portingbury Hills Iron Age settlement. After stopping for lunch at the hub, we resumed our ramble around the southern part of the Forest, passing through Collin’s Coppice, Emblem’s Coppice and Lodge Coppice before returning to the Café and Visitor Centre. We are very grateful to Niamh Carton, the NT’s Welcome Manager, Ian and their colleagues for the assistance they gave in organising this ramble and in the day itself. Bee and Mark